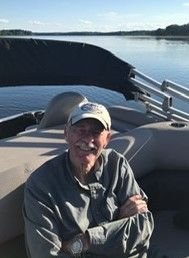 Pete was born on April 11, 1947 to Henry “Hank” and Marian Borgen in Peoria, Illinois. Pete’s love of the water as a child led him to serving in the United States Coast Guard stationed in Cape Cod.After the Coast Guard, Pete attended Illinois Central College in East Peoria, IL. He then continued his education at Western New England University, where he graduated with a degree in Business Administration and graduated with honors - Magna cum Laude. A few years after he completed college he moved to California and began working for Prudential. That job led him to Minnesota where he continued working for Prudential – he was with them for 25 years.He later worked for United Health and again was with them for 25 years.

In Minnesota, Pete settled in Maple Grove and lived there for over 30 years.While in Minnesota he met and married Holly Christenson on July 30, 1994. Pete stepped in as a father-figure to Holly’s then 8 year old daughter, Melissa. Melissa’s love of hot dogs came from dinners shared with Pete.

Pete’s love of water from childhood continued throughout his life. About 20 years ago, Pete decided to buy a lake home in Minong, Wisconsin.He loved small town life there and enjoyed hours of boating, fishing, ATV-ing, and being outdoors in the beauty of the Wisconsin woods. Lake life, fishing and time on the pontoon is where you would find Pete most weekends.There had to be an event going on to keep him home in Maple Grove. He also loved his annual fishing trips to Canada with his father-in-law, Jack and the guys.

Pete's compassion and care extended to our four-legged family as well. He loved and trained our five miniature schnauzers over the years. Our first furry friends included Nautica, Emma and Taylor. Nine years ago Pete’s brother-in-law, Matt, passed away, and asked if he would take care of his “two girls”, Marley and Maddie. They were a welcome addition to the family and - like those who came before them - thrived with Pete's loving care and attention.