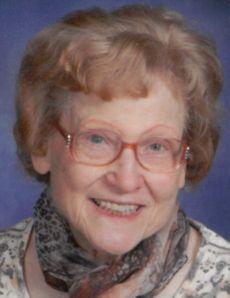 Alice J. (Meinhardt) Rooney was born on June 22, 1931 to Arthur and Emma Meinhardt - one of 6 children and lived in Verndale, MN. After graduating from high school, Alice attended Minnesota School of Business and began work in the secretarial field.

She soon met the love of her life, Raymond J. Rooney. Ray and Alice married November 29, 1952 and settled in Minneapolis, MN. They were blessed with five children - Mark, Pam, Mike, Jeff and Jon. Sadly, Mark was taken from them at the age of 6 weeks. While the rest of the kids were still in elementary school, the Rooney's moved to Osseo, MN where Alice has lived ever since.

The family spent a lot of time camping in the early years until Ray and Alice bought a cabin. The cabin became the weekend retreat and activites enjoyed were fishing, water sports and the outdoors. Alice was also an "avid" snowmobiler back then.

Unfortunately, Alice became a widow when Ray passed away in 1991. But that didn't slow her down, she began traveling with church groups, friends and family -- including a trip to the Israel and the Holy Lands which was momentous. Alice enjoyed weekly card games and was also part of a "walking group" every morning when Alice and her friends would do 3-mile treks on the streets of Osseo. With her family growing with grandchildren, great-grandchildren and most recently a great-great grandchild, Alice also spent much of her time with her family at the cabin, on outings and always on Holidays.

Alice was known for many things but on the top of the list was her steadfast faith and devotion to her church. She was also known for making up her own rules when playing games, her sense of humor, and her heart full of love.

After a sudden stroke on May 22, Alice was hospitalized and died peacefully on May 23, 2019 surrounded by her family. She will forever remain in our hearts.

Alice was preceded in death by her parents, Arthur and Emma Meinhardt; her husband, Ray; sons, Mark and Jon; son-in-law, Dave; sister, Ruth; and brothers, Ernie and Roy.