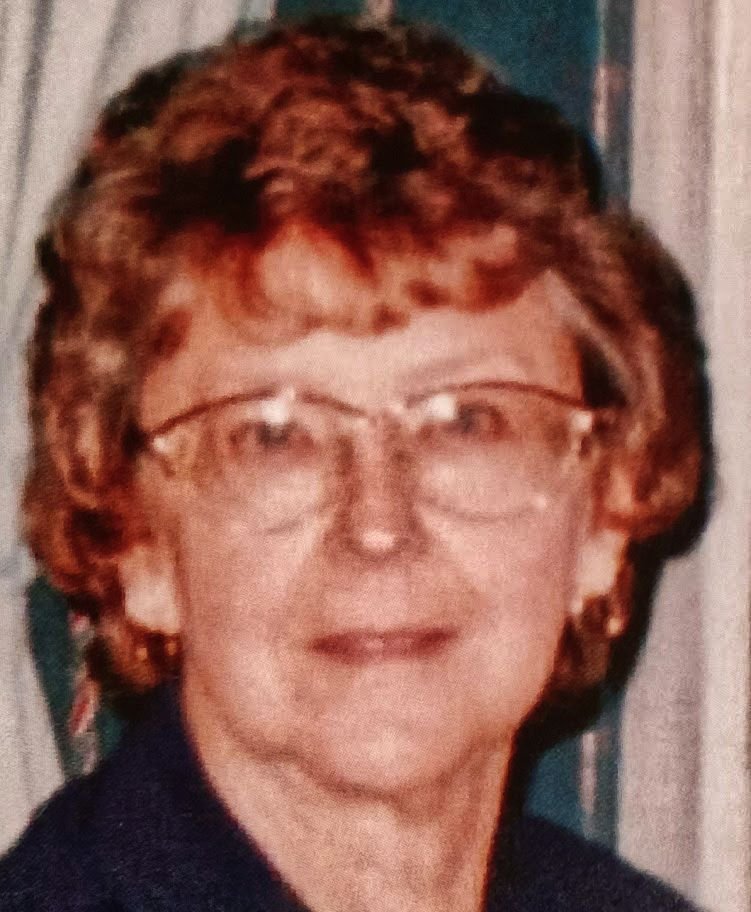 Passed away after a short illness on Tuesday, August 31, 2021. Norma’s life was evidenced by a dedication to serving God through serving the people closest to her. Norma was born March 19, 1935 To Gus and Marie Haugen in the log cabin near Maple lake church. Though most of her extended family was in southeastern Minnesota, Norma’s parents moved to The Maple Lake area early in their marriage.

Norma’s early life was centered around her family and the farm, church and school. She and her sister Margaret would play and make mud pies together in the summer - sometimes including a little prize from the chickens. She loved to help around the farm and eventually drive a tractor, too. Church and Sunday school were important to her, and it seems that she learned to serve and work hard quietly without being acknowledged. She felt satisfied that she could help people and did not need to get any credit for it.

Norma attended country school to grade 6 and then Fertile High School. In High school she won a poetry contest where she wrote about life on the farm. Many of the friends with whom she attended high school were lifelong friends. After high school Norma decided to attend Lutheran Bible Institute in Minneapolis. She described the time upon moving to the cities as very fun, and not always safe. She arrived in the city with a little money and a suitcase. She and her roommates would do silly things downtown, like point and stare into the sky and see if they could gather a crowd. After attending LBI for 2 years, she entered nurses training through Deaconess hospital. This was a very rigorous training where they would take classes during the day and then work nights and weekends in the hospital, basically on call. It was the ultimate in on the job training. She described one time where she was working with a doctor who came from one surgery and then came to deliver a baby without washing his hands. She had to leave the room to throw up and then come back .

During this time a friend introduced her to Virgil Anderson. Virgil says that right when he met her he knew he wanted to marry her. They were married on April 6, 1963. In 1965 they bought their home in Brooklyn Center and a year later adopted their first child, Kathy. In 1968 they adopted Scott. Right after adopting Scott, Norma developed appendicitis and so Virgil’s mother lived with them and cared for the new baby and toddler for a little while until she recovered. Norma and Virgil decided that she would stay home and care for the children in their formative years. She made their clothes, baked bread and cookies which blessed the neighborhood kids also. When their children were in Jr. High school, Norma went back to work, this time serving as a nurse at Maranatha Care center, in their neighborhood. She worked there until she retired in 1997.She not only worked diligently and professionally as a nurse, but she also made wonderful friendships with her fellow nurses. They were planning a get together at the time mom got sick. After she and Virgil retired, they enjoyed going for long walks and also spending time with their first grandchild, Ryan, and then with Stewart, Kenny and Martin. Norma was a wonderful mother and grandmother. The grandchildren remember grandma’s cookies and lefse, ready laugh and listening ear. After retirement they also volunteered with a medical ministry and also with a ministry to Chinese students. Later as health limited them Norma spent more time home caring for her husband. She was always serving him and caring for him, making sure he was cared for and comfortable. On July 29 Norma went into the hospital for a gallbladder infection which turned to sepsis. This impacted her heart, caused internal bleeding which led to the need for a CT scan which in turn compromised her kidneys resulting in acute renal failure. After 22 days in the hospital and 3 tries at dialysis it was determined mom could not take it. She decided she was ready to be with God.

Norma spent the last 11 days of her life at JA Wedum Hospice, where she was able to have her husband, children and grandchildren at her bedside. She passed away Tuesday, August 31 at 8:35 AM.