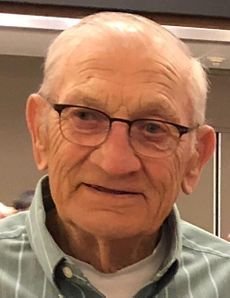 Mickey was born in Pierz, MN to John J. and Margaret (Seelen) Boser. Growing up on a family farm with 14 siblings, Mickey learned the value of hard work and how to get along with others at an early age. This would serve him well throughout his 90 years. In addition to helping out on the family farm, Mickey worked other jobs in town, including helping build the local high school in Pierz. On his 21st birthday, Uncle Sam called to say Mickey was needed in the US Army to serve in Korea. After a two year stint in the Army -- achieving the rank of Staff Sergeant -- Mickey was honorably discharged and returned back home to Pierz. He worked construction jobs around Pierz and then worked for the railroad constructing railroad bridges for several years. Mickey moved to Osseo in 1961 to start his career at Spancrete, where he would work for 40 years building many concrete structures around the Twin Cities and Upper Midwest. He would also meet his wife to be, Lorraine, after moving to Osseo. Mickey and Lorraine were married in 1964 and moved into their "forever" home in Osseo in 1965 where they raised their four children.

Mickey's sunny personality and quick wit will be missed by family and friends. After retirement from Spancrete, Mickey could be seen around Osseo on his daily walks, picking up trash, talking and joking with neighbors, and telling stories that didn't always follow the truth, to anyone who would listen. He was loved by young and old alike and was always willing to help others in need. Mickey was a hard working, dedicated husband, father and grandfather. He and Lorraine attended many of their children's and grandchildren's sports and activities. Mickey was a member of the American Legion and along with Lorraine, a 56 year member of St. Vincent de Paul Catholic Church. As an usher for many years, he liked to go into the crying room and talk to the kids. Mickey enjoyed reading western novels, taking naps, fixing things around the house and working on wood projects. Over the years, he built several dozen wishing wells that may still be seen around town today.