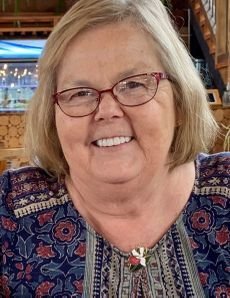 Gail was born on March 28, 1947 in Breckenridge, MN to Robert and Doris Davison. Along with her older brother Richard, she was raised on a farm one mile south of Tintah, MN and enjoyed playing and being with her many cousins. After graduating from Tintah High School in 1965, she attended Concordia College in Moorhead and then graduated from the University of Minnesota in Minneapolis with a Bachelor of Science degree in nursing. Later she received her Master’s in health education from Mankato State University. She worked as a pediatric nurse in Boston and Minneapolis and was head nurse of the emergency room at Minneapolis Children’s Hospital. She finished her career at Medtronic working as an educator and a clinical research coordinator. She was a part-time missionary in Huehuetenago, Guatemala for the past 20 years and travelled there approximately 100 times.

Gail loved to cook gourmet meals and often hosted afternoon teas with her best friend, Lynne Petersen. She was active in Edinbrook Church and enjoyed jigsaw puzzles, genealogy, travelling the world, knitting, and gardening. She learned to play piano and flute from her mother and continued to play and share her joy of music with others throughout her life. Leaving an immeasurable legacy, Gail’s warm heart touched people everywhere she went; she loved deeply and shared generously.

She is preceded in death by her parents Robert and Doris Davison, three infant brothers, and many aunts and uncles.

A memorial service is at 10 a.m. on Saturday, July 11 at Edinbrook Church in Brooklyn Park. To honor Gail’s wishes for all during this pandemic, the family requests that attendees wear masks. The service will also be live-streamed and recorded at https://tinyurl.com/ycmcs27d. Interment will be at Riverside Cemetery in Nashua, MN. Burial service will be at a later date.

Memorial gifts in honor of Gail can be donated to Stories Foundation or Feed My Starving Children.