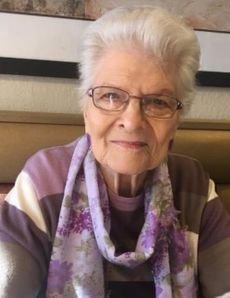 Barbara Sarah (Wieland) Kinsella passed on April 30, 2022 surrounded by her loving family. She was born on July 2, 1923 in Bertha, MN. After marrying Joseph Kinsella October 12, 1943 they made their life together in NE Minneapolis and then Brooklyn Center. She worked most of her life in hospitality and Amway. She had a love for music and was a member of the St. Alphonsus church and choir for many decades. Her and Joe loved to go dancing and entertain guests. She was a celebrity bowler on bowling for dollars and was even caught on Candid Camera. There were a few things she lived by; eat the ice cream, buy the shoes, and playing cards made for a great day. Being with family is what made her happiest. She was always planning or attending reunions, even up till her 98th birthday celebration in Georgia. Sending out greeting cards to family and friends gave her great joy, and each was signed with love prayers and stuffed with a two-dollar bill. Her last years were spent in Zumbrota, MN where she loved to go out to lunch, read her bible, and pray for her family. Despite a problem with her right foot at the end, she passed on to glory with both of her high arches intact.